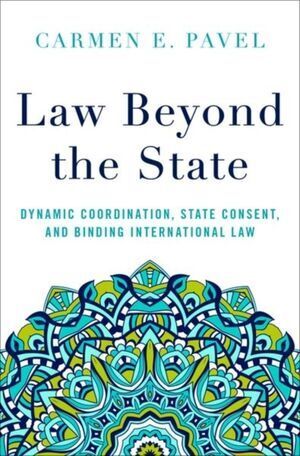 Such retreats expose widespread ambivalence towards cooperation through international law, and reverse the gains made by long-standingprocesses of legalization. In Law Beyond the State, Carmen Pavel responds to the ambivalent attitude states have with respect to international law by offering moral and legal reasons for them to improve, strengthen, and further institutionalize its capacity. She argues that the same reasons which support thedevelopment of law at the domestic level, namely the cultivation of peace, the protection of individual rights, the facilitation of complex forms of cooperation, and the resolution of collective action problems, also support the development of law at the international level.

The argument thus engages in institutional moral reasoning. Pavel shows why it should matter to individuals that their states are part of a rule-governed international order. When states are bound by common rules of behavior, their citizens reap the benefits.

International law encourages states to protect individual rights and provides a forum where they can communicate, negotiate, and compromise on their differences in order to protect themselves from outside interference and pursue theirdomestic policies more effectively, including those directed at enhancing their citizen´s welfare. Thus, Pavel shows that international law makes a critical, irreplaceable, and defining contribution to an international order characterized by peace and justice. At a time when challenges of cooperationbeyond state boundaries include climate change, health epidemics, and large-scale human rights violations, Law Beyond the State issues a powerful reminder of the tools we have to address them.