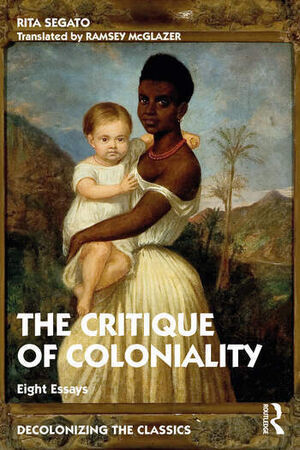 Segato begins with an overview of Quijano's conceptual framework, emphasizing the power and richness of his theory and its relevance to a range of fields. Each of the seven subsequent chapters presents a scenario in which a persistent colonial structure or form of subjectivity can be identified. These essays address urgent issues of gender, sexuality, race and racism, and indigenous forms of life. They set the decolonial perspective to work, and are connected by two central preoccupations: the critical analysis of coloniality and the effort to reimagine anthropology as ´responsive anthropology,´ a practice at once answerable and useful to the communities previously regarded as the ´objects´ of ethnographic thought.

The Critique of the Coloniality makes important and original contributions to our understanding of colonial and decolonial processes, drawing on the author's experience of feminist and antiracist movements and struggles for indigenous and human rights. This book will appeal to students and scholars working in anthropology, Latin American studies, political theory, feminist and gender studies, indigenous studies, and anticolonial, post-colonial, and decolonial thought.

Introduction: The Coloniality of Power and Responsive Anthropology

1. Aníbal Quijano and the Coloniality of Power

2. Gender and Coloniality: From Communitarian to Colonial Modern Patriarchy

3. Sex and the Norm: On the State-Corporate-Media-Christian Front

4. Let Each People Weave Its Own History: The Coloniality of Law and the ´Saviors´ of Indigenous Children

5. Black Oedipus: Coloniality and the Foreclosure of Gender and Race

6. The Deep Rivers of the Latin American Race: A Rereading of Mestizaje

7. The Color of the Prison in Latin America: Notes on the Coloniality of Criminal Law

8. Toward a University for Our America